So I went with my friends to a fabulous party recently.  I had a fun time, there was great entertainment and some creative girls with a typewriter and a sewing machine who would write you a story if asked, and then sew fabric trimmings around it to dress it up, how creative is that?  I wore a couple of new pieces I had just made.  First I made this little cybergoddess.  Sometimes I just wake up wanting to do a particular thing, perhaps inspired by something else I have seen.  Mostly she is made of vintage computer, doll and clock parts and an upcycled chain.  I wanted her to be quite large so she has a 3 inch wide base of a newly poured jewelry finding from a vintage mold, and she makes me smile.

I also made a hat with vacuum tubes from radios and televisions that I lit up with some LED lights , everyone tried it on as you will see.  The first shot is in the dark so you can see how it looked without the flash.  I used a little hat base and then attached it to a headband (thanks for that idea Janet, it was great).  The batteries and LED lights are inside the hat in a little styrofoam to create some stability.

The top is a Jones of New York Size 3X that I bought at Macys, and I am not wowed by how it looks or fits, but I love how small the sequins are and that they do not scratch my skin.  The skirt is a older Torrid 5X.  I had a great time with my friends and I am having fun creating little unusual items.

I bought this dress because I love the tiny sequins, they feel so much more secure than to larger ones.  But it does not really wow me when I wear it.  It is only a 3X and I really wear a 4X, but it is big in the shoulders or the neck, or maybe it is the sheath shape.  But since I was going to a funky-fun attire sort of evening at The Crucible I thought I would take it out for a spin, and I got a lot of compliments on it. I am 5’5″ and weigh exactly 275 lbs. (per the Doctor’s scale last Monday) and the leggings would not fit anyone larger than I am that is an apple shape. I wanted to show you  a close up of the bracelets since I am wearing them almost daily. Some of the bangle bracelets from Torrid do not fit over my big hands but these did and they amuse me. ( I did not wear the boots, at the last minute I changed into little black flats ;D)  Ciao Bellas…affinity

I thought you might like to see a little more about the event so I have added some photos.

And this last photo is part of the entertainment for the evening: This is a Tesla Coil and Omega Recoil, the man in the fireproof/electricproof suit is lighting a lightening bolt on fire. Quite Amazing

I bought this Black Tiered Skirt from DKNY Jeans on sale in a size 26-28.  The “Jeans” line appears to have one size larger than the DKNYC line, but it is actually about the same size, a very generous 4X, in my opinion.  I think I am going to cut one tier off because it is a little long the way it is and it will have more flow and swish a layer shorter.  I will put up a photo when I put together an outfit.  And yes it is on sale…affinity

I found this fabulous, beautifully made, and much more attractive than in the photo, dress in several locations on the web on sale for various amounts.  I purchased it from Macy’s in a 3X (I usually wear a 4X) .  I loved it but it was a little large in the arms and would have needed some tailoring.  But I will keep my eye out for DKNYC from now on.  Their clothes are fun, stylish, they are sized about a size larger and they must make an abundance of them because they seem to go on sale… affinity

So, while writing this post, I fell back in love with this dress and I re-ordered it from Bloomingdales (still on sale).
Bloomingdale’s 1X – 3X

Wearing whatever plus size fashion I want, whenever I want. Excited about glam, edgy or sophisticated, size 26/28. Love collaboration and DIY. Recovering attorney. 66 going on 16. 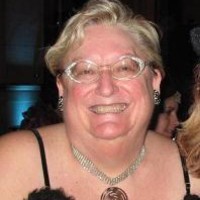